WEARING PINK TO SUPPORT THE CRUSADE 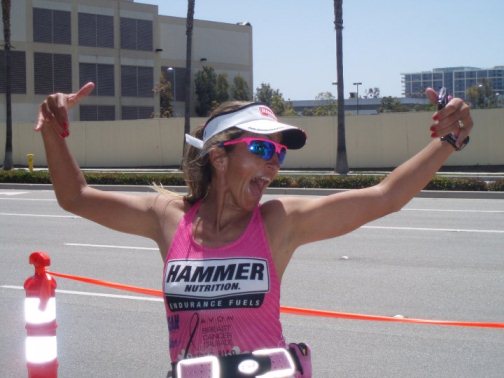 You know the old saying… the glass is either half empty or half full; I decided to go the route of half full! I was having a pretty ugly 2005, I had broken my collar bone in a double iron race in Quebec and other issues had followed. I was at an all time low, when by chance I was asked to go to Curves in San Juan and the General Manager of AVON of Puerto Rico was doing a speech on Breast Cancer, I told my friend Ily that I could not give money for the Crusade but I could give him my legs!!

So since the November Ultraman of 2005 I have been running, cycling and swimming for the Avon Crusade against Breast Cancer of Puerto Rico. The formula is quite simple, I cover x amount of miles and Avon meet it with so many dollars per mile and each October they write a check to the American Cancer Society. The only catch was the wearing of pink when possible, not my favorite color yet it seemed a little sacrifice for such a huge cause!

I soon discovered a lot of the companies that support me had pink items, Brooks USA set me up with pink running gear for her and running shoes, Hammer Nutrition came out with a pink cycling and Triathlon uniform, Serfas had pink tires, Fuelbelt had pink hydration belts & Rudy Project even had pink shades! I really had no excuse but to wear the color pink and it did not look that bad really!!

It remains the most commonly diagnosed form of cancer worldwide!! At one time or another every household will experience this tragic illness through family friends or someone they know! Breast Cancer needs to be stopped!

So in 2006 I decided to go out of my way to find races which were long distance as the more miles in the bank were more miles in the mission to find a cure for Breast Cancer. I entered a World Championship Triple Iron distance race in Austria. After swimming 7 miles in a lake I was seriously questioning my sanity, I managed to get onto my bike to begin the 336 mile bike portion but soon found my self in a whole new world of pain, a combination of jet lag and drinking a little too much lake water and added to that a heat wave! I was feeling the need to lie down and quietly quit! As I was feeling very sorry for my self I called my husband AL and he said “If it was easy every one would be doing a Triple Iron- Man Distance Triathlon” I thought of all the women and men suffering from Breast Cancer and their fight for survival, never giving up hope and always looking for a cure, I decided my day was not done and mounted my “Carbon Steed” The miles came and went and soon I was on mile 336! I had cycled through the night, and most of the day in incredible heat, I had kept well hydrated and taking my Hammer Nutrition religiously especially the endurolytes! The bike finish was sweet and I thought it wise to relax for 30 minutes before getting ready to run 78 miles. I repeated my mantra 1 mile 78 times…. I changed into my Pink Brooks gear! All the time thinking of why I was doing this and soon I was running mile 77 I could smell the finish line, as tired as I was I felt a renewed rush of adrenaline, My crew and lots of the spectators ran across that finish line with me, although the finish line is never ending in the Avon Crusade against Breast Cancer my race was and more money was put in the bank for mammograms in Puerto Rico! That year I also did a double iron distance race in Virginia and Ultraman Hawaii.

To date I have raised over $60,000 for the AVON Crusade against Breast Cancer of Puerto Rico. It is now 2010 and I am still finding races to enter to add the miles.

In closing I would like to add a few simple tips to reduce the risk of Breast Cancer.

The Avon Breast Cancer Crusade began in the UK in 1992 and in 1993 AVON USA adopted the Crusade, over the last 17 years AVON philanthropy has raised and donated more than $640 million to Breast Cancer programs around the World. Since 92,AVON had educated over 100,000,000 women world wide on Breast Health through community based programs and has linked over 14,000,000 women world wide to mammography screening, provided $158 million to Breast Cancer research projects since 1999 and more recently $22 million for 41 research projects focused on primary prevention.

I am but one small Ultra distance triathlete making my pitch to find a cure… There is no race too long or too suffer-able to compare to the pain of Breast Cancer. Do not quit when the tide is the lowest for it is just about to turn!

I want to make a difference in the fight against Breast Cancer!