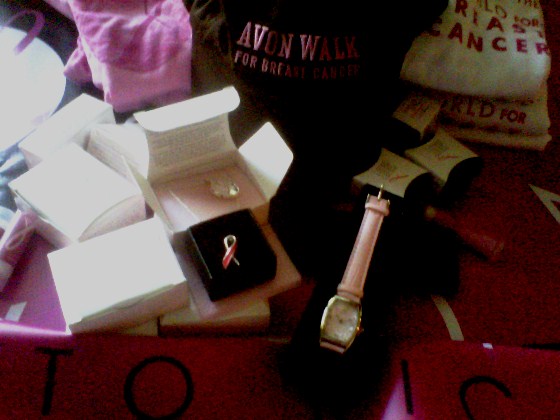 From January to June I have swam, biked and ran 860 miles, despite stress fractures and family commitments! So am past $6,000 for the first 6 months, I plan to double that in the latter half of the year!!

In July I am heading out to Whitefish Montana as a guest of Hammer Nutrition were I hope to log a few more miles in Big Sky Country!

I will be in Puerto Rico for the opening of the New Cancer Facility in October 2010! Planning on a few Island races that would be cool too!

Was a slow start to the Avon Crusade of 2010, I have had my fair share of injuries and time out with 8 weeks with a stress fracture starting off my season. I managed a few 13.1 mile runs and a few bike rides. April was more promising as I dived into Boston Marathon and the 202 mile Ragnar Relay, with the anticipation of a few 200 mile bike rides a triathlon on the horizon

Have been representing Crusade against Breast Cancer since Nov 2005 here is my finish at Ultraman 2006 with the Crusade ever present.

In April I did a few triathlons and May looking forward to a 200 mile bike ride, triathlon, a few clinics and seminars as well as prepare for a marathon in June.

My year will be fulfilled with my 13th Ultraman Hawaii of which I am the only woman in the World to achieve this status! and a double iron race in Virginia. With every mile I do the dollars add up for the Breast cancer crusade. For AVON of Puerto Rico. Watch out for my new uniform and Ocean Potion will be on board with AVON to help the pledge to grow.

It is offically Breast Cancer month,

Total Cheque for the American Cancer Society for miles swam, biked and ran:

In October I am planning on doing a double century, a marathon, a century ride and train hard for November. The money I raised will help women in Puerto Rico receive mammograms, and when the new cancer facility opens in San Juan Puerto Rico hopefully early February of 2010 I will be there for the ribbon cutting as will have a room named after me for the money I have raised through the AVON breast Cancer Crusade.

Thru swimming, biking and running!

In November 2005 I joined forces with AVON of Puerto Rico.

Their quest to raise awareness for Breast Cancer and help find a cure!

That year I raised over $16,000 which goes towards free mammograms in PR.

In October 2005 I was presented at a press conference and teamed up with Avon.