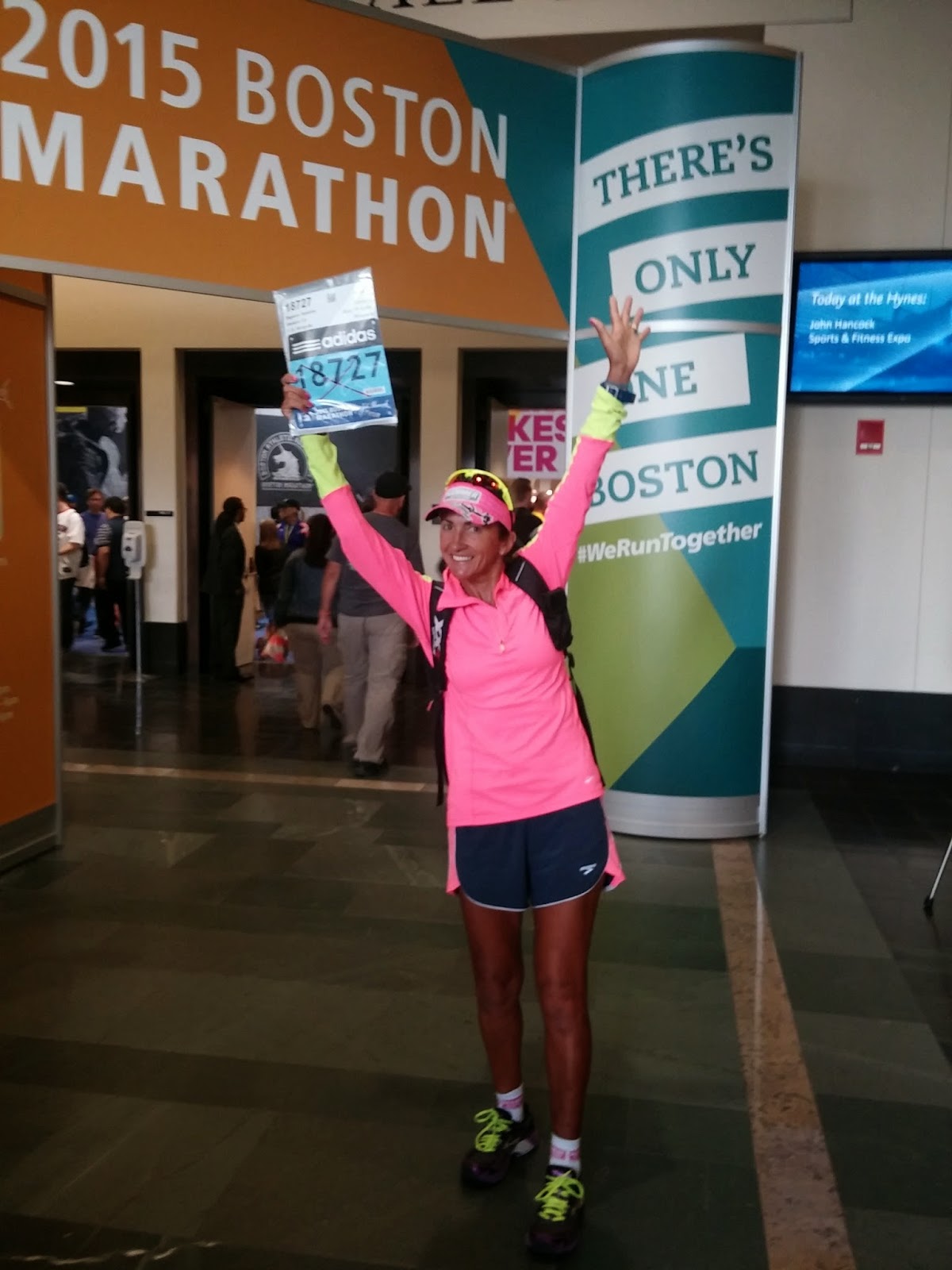 Phew …. Boston Bound amazing what a few days of stretching and therapy does for the body and soul! or soles in this case too!!!! I probably should not have done the marathon considering I am rehabilitating from lower back maladies, but I really thought I could just jog it nice n easy…..

Now I had arrived at Hopkinton start at 6.50am a full 4 hours before my blue wave was to go off….a good thing as I could use any of the porta loos all well stocked with toilet paper and hand sanitizer! I took a few pics before the first buses from Boston Common arrived and suddenly there was 1000s of runners competing for a little bit of real estate with their plastic bags, and throw away second hand clothing and blankets!

I had my spot and did the stretches to warm up my lower back, making new running friends was not difficult as we were packed like sardines in a tin as it began to rain and every one wanted shelter under the teepee!

90 minutes before my wave I ventured out into the cold to use the toilet and was pretty much in line for 70 minutes! I barely made my wave start arriving in my corral with 5 minutes to spare!

THE STARTING LINE IS THE CHALLENGE….

It is not just a start line… it is the beginning to the end of the journey which got you there in the first place… it represents the commitment and I had barely made it there… so many set backs but my vision was Boston… I cancelled race after race in 2015, I jogged walked the LA marathon just to see if I could remember how to do that distance. I was at Clientrainers San Dimas gym two times a week working on strength and flexibility… just one week prior to the marathon I woke up with muscular pains in my lower back…. but I MADE THE START LINE! more thanks to my hosts Kathy and Brian Laska who lived 20 minutes from the start line but I made it…..and then it would rain…

Yup pretty much sums up the 26.2 miles the short version is the gun went off just before 11am…. the heavens opened to give us all rain and head winds..delightful..now my problem was not so much finishing but do I keep the plastic bag on? do I run in the sweats and top which were throwaways… I thought keep the gloves, toss the sweats and keep the garbage bag! Every mile that past I hit my V800 Polar monitor,,,as slow as they were I was running (jogging) Boston Strong!

The longer version was it was pretty much unbelievable despite the miserable conditions to run in (which in hind thought is only miserable to those runners who live and train in warmer and not so much rain climates…) was the crowd! The roared BOSTON STRONG! through all the different towns we went through the volunteers all lined up with water and power drink their smiles were welcoming the high fives I gave out were numerous… Â  to young children lining the route. The entire 26.2 miles gave you the runner a reason to keep going forward.

The dreaded Porta a loo

So I had tossed out my gloves at mile 5 they were soaking wet and I thought counter productive to keep wearing…but as the miles ticked by the wind chill was relentless in its quest to change me into an icicle … I was keeping well hydrated and needed to stop to use those awful things called Porta potties… As I opened the door the image that greeted me was like “Oh my goodness did some one have a fight with the toilet?” It was pretty disgusting but the urge to pee over took the urge to vomit .. the rain drops tinkled on the plastic roof as I tried to not inhale the air in the loo. after I had finished to my HORROR my fingers were so cold I could not redress myself… I put my hands under my arm pits to warm up my fingers.. death in one of there things is not how I want to leave this World. Finally after 5 or so long minutes it seemed a life time I was able to look descent to escape a toilet which clearly showed there was a runner ahead of me who is really suffering with the trots….and was thankful it was not me!

Escaping that loo was awesome but I was very cold and this time another runner would stop and ask me if I wanted her gloves! Oh a guardian Angel indeed. She assured me she did not need them and for that I was ever grateful/

At mile 18 was were my body could safely run to on limited training I still had 8.2 miles to go and then it became a mental game of mind over body while making sure I did not hurt my back ..walking was NOT an option. I played visualization I thought I was running on my old training grounds in Boqueron Puerto Rico along the playa the sun was out and I could feel sand between my toes…. after I had ran that I then thought of the High School Swimmers who at meets I clearly and loudly shout at….”kick kick kick” ” come on keep moving” “you can do this..own the pool” I grinned at myself and could almost here Coach Joe s booming baritone voice shout “MOVE” “Come on pick it up!”

For sure the last 3 miles were on crowd support just amazing I would shout to the crowd Boston Strong and they would go into an up roar!

A big shout out to my husband this was my 51st birthday gift (spent at the expo) and to Kathy & Brian Laska for their amazing hospitality before during and after the marathon.

For fueling the marathon I was able to have an egg sandwich before I left the house….While on the run I had on my new fuel belt I had chocolate/ peanut butter gels in one bottle and Nocciolo gel in the other bottle I also had endurolytes every hour…and immediately after I had finished and being cocooned in an awesome Boston heat cape ate my Hammer chocolate Peanut recovery bar and went searching for hot coffee…..

Now I have to work on getting 100% fit again so I can run Boston next year on my actual birthday and do the projected time I want to do healthy and not just jog the marathon with lack of proper training due to set backs. I did 4 hrs 3 minutes but qualified again with a 3 36..

Here is my relive experience from my Polar V800

Big thanks to the companies that support my racing Hammer Nutrition for race day nutrition, Rudy Project USA for awesome Fluros! Polar USA for helping me listen to my body, Brooks Running for running happy and Kool n Fit spray which I had all over my legs and feet. Ocean Potion for lip balm and Fuel Belt for helping me organize my race day needs. #howihammer #runhappy #rudyprojectfluros #V800 #listenstoyourbody #koolnfit #oceanpotion